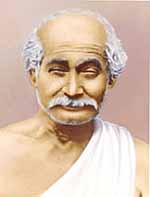 Lahiri Mahasaya (1828 – 1898) was one of India’s foremost Spiritual Masters. His original family name was Shyama Lahiri. Mahasaya is an honorary Sanskrit prefix meaning “magnanimous one”.

Up until the age of 33, Lahiri Mahasaya lived an ordinary worldly life. However, circumstances took his job to the foothills of the Himalayas. It was here that he had a remarkable meeting with the avatar Babaji. Babaji was able to rekindle Lahiri Mahasaya’s spiritual realisations. Realisations he had attained in previous lifetimes. After experiencing the bliss of Samadhi in the Himalayan Mountains. His Guru, Babaji, directed Lahiri Mahasaya to return to his worldly life and teach the ancient art of Kriya Yoga.

“You have been chosen to bring spiritual solace
through Kriya Yoga to numerous earnest seekers.”

During his lifetime he initiated many seekers from different faiths into the ancient Indian art of Kriya Yoga. In particular, he was willing to break down the rigid caste barriers that were present at the time. Lahiri Mahasaya saw God everywhere and was unencumbered by social status.

“Meditate unceasingly, that you quickly behold yourself as the Infinite Essence, free from every form of misery. Cease being a prisoner of the body; using the secret key of Kriya, learn to escape into Spirit.”

– Lahiri Mahasaya (from Autobiography of a Yogi)

Towards the end of his life, his aura of spirituality and peace attracted many sincere seekers who would come to meditate in his presence. However, Lahiri Mahasaya only became well known through Paramahansa Yogananda’s “Autobiography of a Yogi”.

“surely the Yogavatar reached the zenith of all wonders in reducing the ancient complexities of yoga to an effective simplicity within the ordinary grasp.”