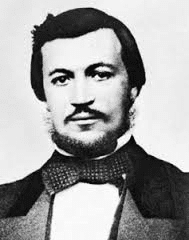 Nikolaus August Otto was a German engineer who developed an effective internal combustion engine. Otto’s development of a four-stroke engine significantly reduced the weight and increased the power of a petrol engine, making petrol-powered cars a realistic proposition and alternative to steam power. It ushered in a new era of the automobile, which changed life for millions in the Twentieth Century.

Nikolaus Otto was born 14 June 1832 in Holzhausen an der Haide, Germany. After leaving school he gained work as a grocery salesman selling colonial goods, such as coffee, tea and sugar.

In the nineteenth century, the dominant form of energy was steam power – usually from burning coal — this form of energy dominated industrial machines and transport (railways). But, steam power had serious limitations, it was heavy and required substantial man-power to burn the coal. In 1860 in Paris, Jean Lenoir developed a two stroked gas-powered engine – this was a novel invention and was a critical moment in developing an alternative to steam power.

Both Otto and his brother came to learn about this gas-powered engine and sought to build a replica. In 1861, Otto built a compressed fuel charged gas engine based on Lenoir’s model; it only worked for a few minutes before breaking. While his brother became discouraged by this initial failure, Otto sought to continue working on better alternatives. In 1864, he formed a partnership with Eugen Langen, a wealthy industrialist to form a company exclusively focused on the design and production of internal combustion engines.

Their first engine was a gas powered atmospheric engine, which worked on the controlled explosion of gas creating a vacuum to pull the piston. It used less gas than Lenoir’s engine and was good enough to become a commercial seller.

In 1867, they won a gold medal at the Paris exhibition because of the efficiency of the engine.

With sales increasing in 1869, the company reallocated to the town of Deutz in Germany, and in 1872, the company hired Gottlieb Daimler to run the factory.

Otto still felt his atmospheric engine was limited – he couldn’t increase power beyond 2.2 kW and it required a lot of space to operate. He went back to trying to develop a four-stroke engine. With the help of Franz Rings and Herman Schumm, he was successful in creating the first commercial in-cylinder compression engine. They were light, efficient and reliable. They offered significant advantages over other engines on the market.

The Otto four-stroke cycle engine was an important breakthrough in the development of an internal combustion engine. The engine had four strokes or cycles for each ignition. 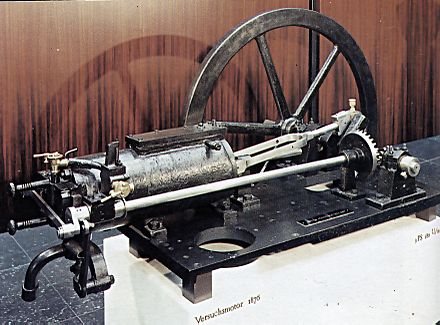 Initially, the engines were designed for stationary installations, e.g.in factories. Otto was not interested in transportation. But his colleague Gottlieb Daimler was impatient to use it for vehicles. Frustrated, he left the company and took Otto’s designs and used to manufacture his own engines which were placed first on a bicycle and later in cars. The engine was also adapted to run on different light fuels – the most important being petrol (gasoline)

In 1885 Daimler/Maybach Petroleum Reitwagen (Riding Car) was the first motorcycle (and the first motor vehicle) using an internal combustion engine. It was based on Otto’s engine, though they avoided paying him royalties by claiming Otto’s patent was preceded by another.

Daimler went on to found Daimler Benz, a company which still makes automobiles. Deutz is still making engines for heavy-duty vehicles. Although the internal combustion engine has been developed, it is still based on the basic principles of the original Otto four stroked engine

The definitive history of the car

The definitive history of the car at Amazon