Benjamin Franklin (1706-1790) was a scientist, ambassador, philosopher, statesmen, writer, businessman and celebrated free thinker and wit. Franklin is often referred to as ‘America’s Renaissance Man’ and he played a pivotal role in forging a united American identity during the American Revolution. 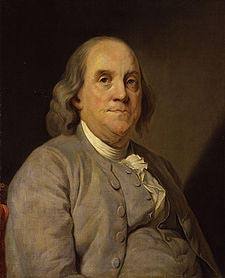 Benjamin Franklin was born 17 January 1706, into a large and poor family. His father had 17 children by two different wives. Benjamin was brought up in the family business of candle making and his brother’s printing shop. Whenever he could, Benjamin would take the opportunity to read and learn about a wide range of subjects, from Sophocles to modern science. Whilst co-workers would take a leisurely lunch break, Benjamin Franklin would pore over books from the bookshop munching on some raisins.

At an early age, he also started writing articles which were published in the ‘New England Courant’ under a pseudonym; Franklin wrote under pseudonyms throughout his life. After several had been published, he admitted to his father that he had written them. Rather than being pleased, his father beat him for his impudence. Therefore, aged 17, the young Benjamin left the family business and travelled to Philadelphia.

“The Constitution only guarantees the American people the right to pursue happiness. You have to catch it yourself.”

In Philadelphia, Benjamin’s reputation as an acerbic man of letters grew. His writings were both humorous and satirical, and his capacity to take down powerful men came to the attention of Pennsylvania governor, William Keith. William Keith was fearful of Benjamin’s satire so offered him a job in England with all expenses paid. Benjamin took the offer, but once in England, the governor deserted Franklin, leaving him with no funds.

Benjamin Franklin frequently found himself in awkward situations, but his natural resourcefulness and determination always overcame difficult odds. Benjamin found a job at a printer in London. Here he was known as the “Water American” – as he preferred to drink water rather than the usual six pints of beer daily. Franklin remarked there was ‘more nourishment in a pennyworth of bread than in a quart of beer.’

In 1726, a Quaker Merchant, Mr Denham offered him a position in Philadelphia. Franklin accepted and sailed back to the US.

On his journey home, Benjamin wrote a list of 13 virtues he thought important for his future life. Amongst these were temperance, frugality, sincerity, justice and tranquillity. He originally had 12, but, since a friend remarked he had great pride, he added a 13th – humility (Imitate Jesus and Socrates.)

1. “TEMPERANCE. Eat not to dullness; drink not to elevation.”

2. “SILENCE. Speak not but what may benefit others or yourself; avoid trifling conversation.”

3. “ORDER. Let all your things have their places; let each part of your business have its time.”

4. “RESOLUTION. Resolve to perform what you ought; perform without fail what you resolve.”

5. “FRUGALITY. Make no expense but to do good to others or yourself; i.e., waste nothing.”

6. “INDUSTRY. Lose no time; be always employed in something useful; cut off all unnecessary actions.”

7. “SINCERITY. Use no hurtful deceit; think innocently and justly, and, if you speak, speak accordingly.”

8. “JUSTICE. Wrong none by doing injuries, or omitting the benefits that are your duty.”

9. “MODERATION. Avoid extremes; forbear resenting injuries so much as you think they deserve.”

10. “CLEANLINESS. Tolerate no uncleanliness in body, cloaths, or habitation.”

11. “TRANQUILLITY. Be not disturbed at trifles, or at accidents common or unavoidable.”

12. “CHASTITY. Rarely use venery but for health or offspring, never to dullness, weakness, or the injury of your own or another’s peace or reputation.”

Franklin sought to cultivate these virtues throughout the remainder of life. His approach to self-improvement lasted throughout his life.

Back in America, Franklin had many successful endeavours in business, journalism, science and statesmanship.

Science experiments were a hobby of Franklin. This led to the:

Franklin never patented his inventions, preferring to offer them freely for the benefit of society. As he wrote:

“… as we enjoy great advantages from the inventions of others, we should be glad of an opportunity to serve others by any invention of ours; and this we should do freely and generously.”

Franklin was chosen as an ambassador to England in the dispute over taxes. For five years he held conferences with political leaders as well as continuing his scientific experiments and musical studies.

Later on, Franklin played a key role in warning the British government over the dangers of taxing the American colonies. In a contest of wills, Franklin was instrumental in encouraging the British Parliament to revoke the hated Stamp Act. However, this reversal was to be short-lived. And when further taxes were issued, Franklin declared himself a supporter of the new American independence movement.

In 1775, he returned to an America in conflict. He was one of the five representatives chosen to draw up the American Declaration of Independence with Thomas Jefferson as the author.

Franklin was chosen to be America’s ambassador to France, where he worked hard to gain the support of the French in America’s war effort. During his time in French society, Franklin was widely admired, and his portrait was hung in many houses.

At the age of 75, the newly formed US government beseeched Franklin to be America’s representative in signing a peace treaty with Great Britain which was signed in 1783.

He was finally replaced as French ambassador by Thomas Jefferson, who paid tribute to his enormous capacity Jefferson remarked; “I succeed him; no one can replace him.”

Benjamin Franklin believed in God throughout his life. In his early life, he professed a belief in Deism. However, he never gave too much importance to organised religion. He was well known for his religious tolerance, and it was remarked how people from different religions could think of him as one of them. As John Adams noted:

“The Catholics thought him almost a Catholic. The Church of England claimed him as one of them. The Presbyterian’s thought him half a Presbyterian, and the Friends believed him a wet Quaker.”

Franklin embodied the spirit of the enlightenment and spirituality over organised religion.

Franklin was a keen debater, but his style was to avoid confrontation and condemnation. He would prefer to argue topics through the asking of awkward questions, not dissimilar to the Greek philosopher Socrates.

The Autobiography Of Benjamin Franklin

The Autobiography Of Benjamin Franklin at Amazon