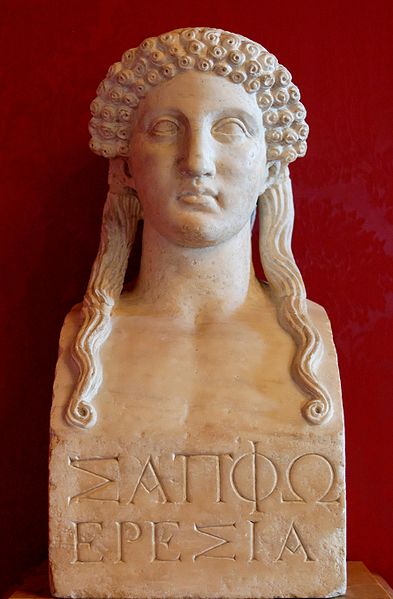 Sappho was an ancient Greek female poet who wrote lyrical poetry famous for its intense passion and description of love. Being born on the Isle of Lesbos she is also referred to as the first Lesbian poet.

Little is known of her actual life, though she was born around 620BC, and died approximately 50 years later.

Unfortunately, much of her poetry has been lost, although some poems have been painstakingly pieced together through surviving fragments.

Details of her life are hard to piece together as there are few reliable sources. For example, historians are unsure about whether to take her poetry as reliable autobiographical evidence.

However, evidence from the period suggests she was temporarily exiled to Sicily because of political troubles on the island of Lesbos.

Sapphos is sometimes referred to as a lesbian. The word lesbian is actually derived from her place of birth – lesbos. However, there is no hard evidence about her sexuality. Her poems express great passion for a variety of people – both men and women; they may have been autobiographical or not.

A philosopher Maximus of Tyre wrote that the friendships of Sappho were similar to those of Socrates – suggesting Sappho had a circle of like-minded friends brought together by a love of art, poetry and culture. It has been suggested, with little authority, that Sappho may have been the head of some formal academy like a school. However, it is more likely to be a less formal circle of friends.

The poetry of Sappho often revolves around themes of love and passion, and has a clarity and simplicity of language; within her poems, there is great vividness and directness. The style is often conversational – giving an impression of immediacy and action. The poems were also sung to music, meaning they needed to be lyrical in form.

“Come back to me, Gongyla, here tonight,
You, my rose, with your Lydian lyre.
There hovers forever around you delight:
A beauty desired.”

(from Please by Paul Roche)

Her poetry also involved retellings of famous Greek classics such as:

“Some an army of horsemen, some an army on foot
and some say a fleet of ships is the loveliest sight
on this dark earth; but I say it is what-
ever you desire:
and it it possible to make this perfectly clear
to all; for the woman who far surpassed all others
in her beauty, Helen, left her husband —
the best of all men —
behind and sailed far away to Troy; she did not spare
a single thought for her child nor for her dear parents
but [the goddess of love] led her astray
[to desire…]
[…which]
reminds me now of Anactoria
although far away,

Her poems were written in Aeolic Greek dialect; as this dialect was quite rare, it explains why her poems became increasingly lost as fewer people were able to translate them.

The difficulties of the Aeolic Greek metre, also means there is considerable variance in English translations.