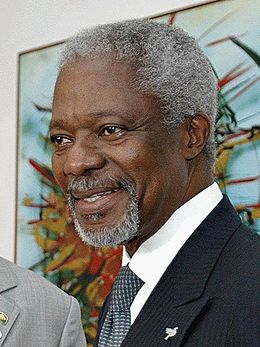 Kofi Annan was born into a family of traditional chiefs of the Fante tribe in Ghana, He rose to become Secretary-General of the United Nations, winning the Nobel Peace Prize in 2001.

He grew up in Ghana where he became known as a student leader. He gained a scholarship to study in the US. He also later studied in Geneva before returning to the US to study management at MIT.

For most of his life, he has worked in the United nations rising from the lower ranks to become one of the few insiders to be awarded the top job of Secretary-General. He served as Secretary-General for two terms from 1997 to 2007.

“We can love what we are, without hating what, and who, we are not.”

He began working for the World Health Organisation WHO in Geneva in 1962 and later served in the UN high commission for Refugees. Kofi Annan held a series of high profile positions from human resource management to peacekeeping (1992-1996)

Kofi Annan was widely liked by both fellow UN workers and even critics of the United Nations. For example, Muhamed Sacribey, the Bosnian Ambassador to the UN was very critical of the United Nations involvement in Bosnia. But, he exempted Kofi Annan. When asked why he replied simply: “Because he is honest”

He is known for his ability to get the best out of people but remains a man of principle and does not hesitate to express his convictions. His popularity with UN staff is partly because of his wish to:

“Put the individual human being at the centre of everything the United Nations does,”

He is also known for his stoic calm amidst great uncertainty. He yogic detachment and inner peace are well suited to his task of international diplomacy.

“The World is not ours to keep. We hold it in trust for future generations.”

Kofi Annan is married to Nane Annan from Sweden. She is a lawyer and painter and has been a strong supporter of the United Nations. They have had three children.

Interventions: A Life in War and Peace

Interventions: A Life in War and Peace Kofi Annan at Amazon