Cyrus the Great (600 – 530 BC) was the founder of the Persian (Achaemenid) Empire. Born in Anshan, Persia (modern day Iran) Cyrus conquered the empires of Media, Lydia and Babylonia. In doing so, he created the largest empire the world had seen. Cyrus the Great also ruled with tolerance for the respective cultures and religions of the conquered peoples. He ruled fairly with an efficient administration and was appreciated by those who governed him. His rule became a template for a multi-ethnic state that allowed religious and cultural diversity. His rule was studied and admired by many of the great leaders, such as Alexander the Great, Julius Caesar and Thomas Jefferson.

“Whenever you can, act as a liberator. Freedom, dignity, wealth — these three together constitute the greatest happiness of humanity. If you bequeath all three to your people, their love for you will never die.”

Early life and rise to power 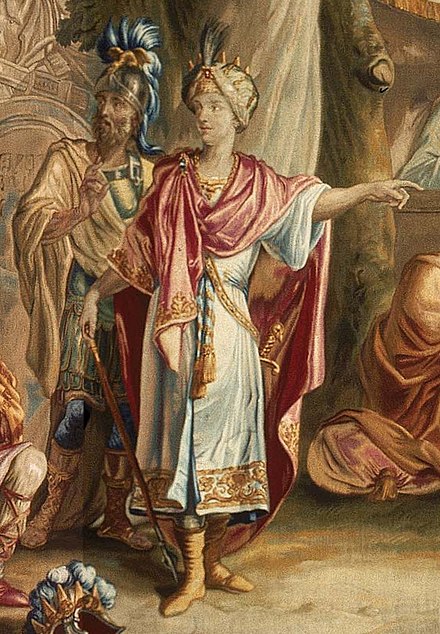 Cyrus was born in the province of Persia in southwest Iran. He was the son of a local chief who were vassals of the king of Medes – King Astyages. The Median Empire was the dominant power in the region, though the Persians were closely connected in culture and family ties to the Medians.

Around 558BC, Cyrus succeeded his father Cambyses I as king of the Persians, but he still was under the rule of the Medes King. Shortly after Cyrus rose to the throne, the Median king Astyages attacked Cyrus – worried about his power and influence. However, helped by defections from the Median army including the general Harpagus, Cyrus successfully led the Persians in a rebellion against the Medes and, after a conflict lasting three years, he succeeded in freeing the Persians from their Medes rulers. When he was victorious, he chose not to kill Astyages and actually married his daughter. This helped Cyrus to gain the loyalty of Median nobles and this strengthened Cyrus’s power within Persia.

A few years later Cyrus launched a campaign against the Lydian Empire in Asia Minor (western Turkey) The king of the Lydian Empire King Croesus was a man of legendary wealth. However, Cyrus was military successful and took Croseus prisoner. Cyrus gained much wealth from this military victory but claimed he used it judiciously to develop his empire.

“Success always calls for greater generosity–though most people, lost in the darkness of their own egos, treat it as an occasion for greater greed. Collecting boot [is] not an end itself, but only a means for building [an] empire. Riches would be of little use to us now–except as a means of winning new friends.” 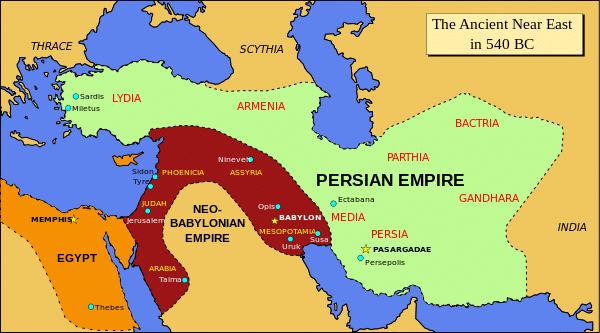 After the western success, Cyrus turned his attention to the east attacking the Babylonian empire in eastern Iran. At the Battle of Opis in 539, the Persians defeated the Babylonian army. Before laying siege to the city of Babylon, his army diverted the main river from the city – enabling soldiers to wade through. Faced with the strength of Cyrus and his army; he was allowed to enter Babylon without any resistance. Babylon was itself a powerful empire having conquered outlying regions, such as Syria and Judea into its empire. In Babylonia, Cyrus was proclaimed “King of Babylon, king of Sumer (southern Iraq) and Akkad and king of the four corners of the world. At its peak in 480BC, the Persian Empire accounted for 40% of the global population, with nearly 50 million of the world’s 112 million people.

“Marduk, the great lord, established as his fate for me a magnanimous heart of one who loves Babylon, and I daily attended to his worship” Cyrus cylinder (c. 538 B.C) 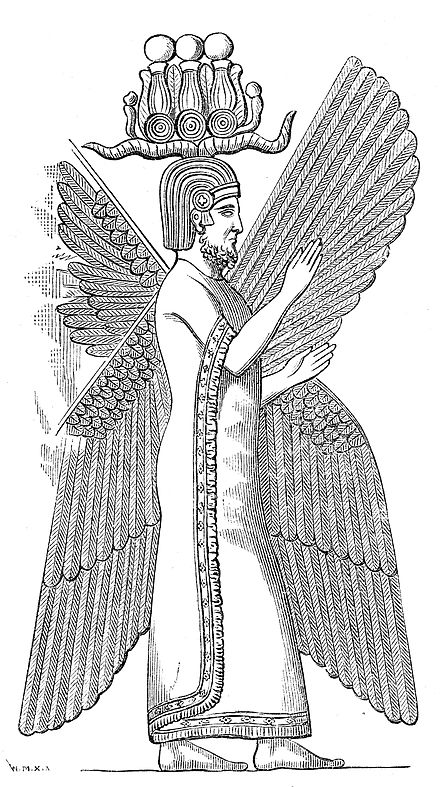 In Babylon, Cyrus also created the Cyrus Cylinder which is a proclamation praising Cyrus and portraying his regal claims. It also documents how Cyrus was welcomed into the city peacefully and how he allowed people to pursue their own religion and culture and allow displaced people to return to their land of birth. The last Shah of Iran claimed this was the first declaration of human rights. Historians feel it is more a declaration of the greatness of Cyrus. But, at the same time, Cyrus’ rule was enlightened for his time. His rule was characterised by allowing displaced people to return to their city of choice and rebuild temples and objects of worship. This religious and cultural tolerance also proved an effective method for pacifying the local population. Cyrus assimilated the different religions and cultures of his vast empire without provoking enmity and rebellion.

“There is a deep–and usually frustrated–desire in the heart of everyone to act with benevolence rather than selfishness, and one fine instance of generosity can inspire dozens more. Thus I established a stately court where all my friends showed respect to each other and cultivated courtesy until it bloomed into perfect harmony.”

Cyrus was also considered a skilled administrator. He created effective and efficient structures to govern his large empire – devolving power to different states – devolving power to regional governors or satraps. The Satraps were responsible for a geographical area. They were accountable to Cyrus but had a degree of local autonomy. In turn, he sought to reward skill and loyalty. The empire was governed by four capital states; Pasargadae, Babylon, Susa and Ecbatana.  During Cyrus’ time, there were also major building works. He built new canals and instituted a novel postal system which, using staging posts, allowed for more efficient communication through the Empire. He also loved gardens and archaeological digs have revealed that in the capital city, there was a Persian Garden maintained by a network of canals carved out of limestone. The historian Xenophon suggests Cyrus was widely popular with his subjects, even those of the former conquered territories.

“And those who were subject to him, he treated with esteem and regard, as if they were his own children, while his subjects themselves respected Cyrus as their “Father” … What other man but ‘Cyrus’, after having overturned an empire, ever died with the title of “The Father” from the people whom he had brought under his power? For it is plain fact that this is a name for one that bestows, rather than for one that takes away!”

There are several different accounts of Cyrus’ death. The account of Herodotus suggests Cyrus died on campaign in Massagetae – a tribe in the southern deserts of the steppe regions of Kazakhstan. An alternative account from Xenophon’s Cyropaedia claims Cyrus died peacefully in his capital city Pasargadae. (near Shiraz in Iran)

After his death, Cyrus was succeeded by his son and the Achaemenid Empire endured long after his death. Even when the Empire was overrun by the Seleucid dynasty 312 BC to 63 BC, they retained many similarities to the state Cyrus created.

Cyrus was widely admired in the classical world for his values and success – even the Greeks who frequently fought the Persians admired Cyrus the Great. Alexander the Great deeply admired Cyrus and poured over the accounts of Cyrus’ bravery and skill as a political leader. Alexander was to claim a large portion of the Persian Empire – though not with the same long-term success. Thomas Jefferson, the third President of the US was also a great admirer of Cyrus the Great and had two copies of the Cyropaedia. The life of Cyrus and his belief in religious tolerance and human liberty may have had some influence on his drafting of the Declaration of Independence.

Cyrus’ own religions beliefs are difficult to precisely know. It is likely that he was influenced by Zoroaster who was a near contemporary. Zoroasterianism became the dominant religion of Persia. On the Cyrus Cylinder, there is one statement:

“pray daily before Bêl and Nabû for long life for me, and may they speak a gracious word for me and say to Marduk, my lord, “May Cyrus, the king who worships you, and Cambyses, his son,”

The Jewish people venerated Cyrus the Great as a righteous king. After the Babylonian conquest of Judea, many thousands had been massacred and remaining Jews had been deported to Babylonia. In the first year of King Cyrus, Cyrus met the most prominent Jewish people living in exile in Babylon and gave them permission to return to Jerusalem.

“I have given leave to as many of the Jews that dwell in my country as please to return to their own country, and to rebuild their city, and to build the temple of God at Jerusalem on the same place where it was before.”

As quoted by Josephus.

Xenophon’s Cyrus the Great: The Arts of Leadership and War

Xenophon’s Cyrus the Great: The Arts of Leadership and War at Amazon