Constantine was Roman Emperor (A.D. 306-337). He was the first Roman Emperor to convert to Christianity and played a crucial role in the spread of the religion. With co-Emperor Licinius, he issued the Edict of Milan in 313, which proclaimed tolerance of all religions throughout the empire.

Constantine was born in Naissus, Moesia Superior (modern-day Serbia). His original name was Flavius Valerius Constantinus and his father was an officer in the Roman army.

Constantine received a formal education at Diocletian’s court where he learnt Latin and Greek and was able to mix with a variety of pagan and Christian scholars. However, the time was also a period of widespread persecution of Christians. In 303, Diocletian began the great persecution of Christians which led to widespread arrests, executions, and destruction of Church property. Constantine would later claim he opposed those measures, though it is more likely that he did nothing.

In 293, the Roman Empire was divided in two by Diocletian, leading to a Western and Eastern Augustus. His father Constantius was promoted to the office of caesar and went to Gaul to campaign against local rebellions. His father’s promotion through the Roman ranks, gave Constantine an excellent chance of succeeding him.

Statue of Constantine at York.

In 305, Constantine left the confines of Galerius court and joined his father in Britain, where he made a base in York. On the death of his father, Constantine was declared Augustus, a decision reluctantly accepted by Galerius.

There then followed years of turmoil and civil war in which Constantine found himself fighting opponents to Roman rule, but also from within different Roman factions.

Constantine was a great military commander winning major victories over the Franks and Alamanni in 306-08, and later against the Visigoths in 332 and the Sarmatians in 334. This strengthened his political strength as he came to be viewed as someone who could unite the fracturing Roman Empire.

The Battle of Milvian Bridge

Battle of the Milvian Bridge by Giulio Romano

On 28 October 312, the forces of Maxentius met Constantine’s forces on the river Tiber. Constantine’s army was outnumbered 2:1. But, 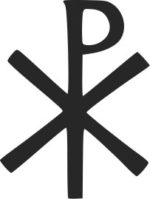 legends state that in the night he had a significant dream, where he had a vision of Jesus and was told to use the Christian cross. Constantine made his soldiers go into battle with the sign of Chi-Rho, the first two letters of Christ’s name in Greek (Christian cross) and he made a promise that if successful in battle, he would adopt Christianity.

Eusebius, a Christian friend of Constantine describes this moment

“he saw with his own eyes in the heavens a trophy of the cross arising from the light of the sun, carrying the message, In Hoc Signo Vinces or “with this sign, you will conquer”

In the battle the following morning, Constantine was decisively victorious, and he was able to enter Rome on the next day. On entering Rome, Constantine embarked on a lengthy propaganda campaign to legitimise his rule and portray himself as a liberator over the tyrant Maxentius.

Constantine was able to consolidate his role, proving his military superiority over his rivals. In 313, with Licinius, he signed the Edict of Milan. This legalised Christianity and allowed freedom of worship. This edict was often ignored, but it was still an important moment with the principle of tolerating Christianity accepted within the Roman empire. It established Sunday as a day of worship and created provisions for confiscated property to be returned to the church. Whilst the Edict of Milan supported tolerance of Christians, there was no mention of Jews, and as Christianity became the dominant religion in Rome, there was a development of greater persecutions against the old Jewish populations.

Another critical moment in the history of early Christianity was in 325 when he summoned the Council of Nicaea. This was to resolve the conflict between two Christian theologians Arius and Athanasius. The motivation of Constantine may have been the desire to create a single unified religion, which was easier to use as a tool for the empire. The Council of Nicaea led to the Nicene Creed, which was the most important tract in formalising what Christianity actually was. The Nicene Creed asserted the view of St Paul that Christ was divine, and made other versions of Christianity, such as Gnosticism and Arianism heretical.

In 326 Constantine has his wife Fausta and son Crispus put to death. Crispus was his eldest son by his wife Minerva. One account says that Fausta was executed by being cast into boiling water. Reasons for Constantine’s order for execution remain unclear. Some suggested a treasonous plot, others suggested sexual impropriety. But, it shows Constantine’s ruthless streak.

Constantine created a new city at Byzantium ‘Constantinople’ (later called Istanbul) this was to be the new Rome of the East. The city was famous for its beautiful adornments, fountains and sports venues.

Another important reform of Constantine was his civil legislation about different professions. Constantine established a structure for the feudal structure of Europe. He passed a law that certain farmers (coloni) were not allowed to leave the farm, but had to stay on the land. This effectively created a class of farmers known as ‘serfs’ who became at the mercy of landlords who could set high rents. Constantine made other professions hereditary.

Constantine’s Christianity is a matter of conjecture. He didn’t profess Christianity until he was over 40. As well as making a tribute to Christianity; he continued to pay his respect to the old pagan traditions and sacrifices to Apollo and Hercules.

Constantine’s mother St Helena was much stronger in her profession of Christian faith. It is believed she was able to influence her son in promoting and protecting Christianity – even if she couldn’t make him share her faith. Whilst the sincerity of Constantine’s conversion to Christianity, his acceptance of the faith by the Roman Empire marked a turning point for the religion. It became obvious during Constantine’s reign that joining the Christian faith was important for gaining promotion and useful privileges. Under Constantine, Christianity went from being an oppressed religious minority to gaining the influence of the whole Empire. It assured Christianity’s spread, though it may also have led to its dilution as The Nicene Creed was critical in defining what Christianity was and wasn’t.

Baptism of Constantine by students of Raphael

In 337, Constantine fell ill and tried to make it back to his capital Constantinople. As he was dying he asked to be baptised by the bishops in the River Jordan.

In medieval times, Constantine was held up as a model ruler by the Catholic church and presented as a paragon of virtue. However, later historians have questioned the sincerity of his Christian faith. They have presented Constantine as a clever scheming politician who saw the political power of a unified religion, such as Christianity.

Influence and achievements of Constantine

Constantine was a very influential figure in world history. Although we may doubt the sincerity of his Christianity, he was the first Roman ruler to openly tolerate and allow the religion to flourish. On his deathbed he made a formal conversion, overturning centuries of persecution and the effective end of the old Roman pagan religions. Constantine not only secured the success of Christianity but he also determined its direction. The Council of Nicene was crucial for formalising the nature of Christianity with Constantine mostly concerned about creating a strong unified church rather than allowing gnostic traditions. Lost beneath the groundbreaking acceptance of Christianity, Constantine also introduced important social laws such as the implementation of serfdom.