Henry Ford (1863–1947) was an industrialist who changed the face of automobile manufacture in America, becoming the epitome of American Capitalism. He lent his name to ‘Fordism’ – efficient mass production.

Henry Ford was born in 1863 on a farm in rural Michigan, near Detroit. From an early age, he expressed an interest in mechanical devices. He was given a pocket watch at the age of 15, and he developed a reputation for being an experienced watchmaker.

Shortly after his mother passed away, Henry left the family farm to seek employment in Detroit. He worked his way up to becoming an engineer at the Edison Illuminating Company. By 1893 he had become chief engineer and gained the recognition and encouragement of Thomas Edison. Henry Ford retained a deep affection for Thomas Edison throughout his life.

It was working as chief engineer at Edison’s that he was able to work on a petrol drive quadricycle. His testing was successful, and this enabled him to develop the quadricycle into a small car. In the late 1890s, he quit Edison Illuminating Company to form his own motor car company. In 1903 the Ford Motor Company was born with the backing of $28,000 from various investors. He worked assiduously on the optimal components for a new car. The company developed the Model A, B, C, F, N before coming out with the famous Model T in 1908. The Model T had many limitations – no speedometer, no starter, no oil gauge, an idiosyncratic gear system, different sized front and back wheels and headlights which ran off a dynamo. However, it was remarkably cheap and over the years, Ford constantly sought to improve the efficiency of the assembly line, enabling higher output and lower costs.

“I will build a car for the great multitude. It will be large enough for the family, but small enough for the individual to run and care for. It will be constructed of the best materials, by the best men to be hired, after the simplest designs that modern engineering can devise. But it will be so low in price that no man making a good salary will be unable to own one — and enjoy with his family the blessing of hours of pleasure in God’s great open spaces.” – Henry Ford “My Life and Work” (1922)

In its first year of production, it sold 10,607 cars and for the next five years output roughly doubled until by 1914, a quarter of a million Model T cars were rolling off his assembly lines with Ford making a profit of $27 million. By 1921, the number of cars produced had risen to 1.25 million. Despite their quirks, they were very popular with working families and farmers, who for the first time saw a motor car as a realistic proposal and not just the plaything of the rich. Such was its reliability that farmers bought the Model-T and converted it to work as a tractor.

A drawback of Ford’s assembly line was that the work was very monotonous and highly regulated, workers were only given a very limited time for breaks and they were metaphorically chained to their post. As a result, the company experienced very high labour turnover, it was difficult to get people to stay. Ford’s solution was revolutionary, he significantly increased wages to $5 a day – far above the national average for workers. This solved the problem of labour turnover as the rewards outstripped the cost. He was even criticised by fellow capitalists for seemingly over-generous pay, but in reply, he pointed out that the high wage helped the workers to be able to afford the cars they were making.

It was Henry Ford who also revolutionised the production line processes. He helped to develop the assembly line method of production and was always seeking to cut costs. Although he did not ‘invent’ the assembly line, he did make one of the most successful commercial applications of its potential. This led to his decision to give customers any colour they choose so long as it was black.

The motive for insisting on black was because black was the quickest colour to dry and therefore the cheapest.

The impact of the assembly line was to help reduce the cost of the Model T motor car. It helped Ford become the dominant firm in the motor car industry. An estimation from 1932 suggested Ford was producing 33% of the world’s automobile production.

Although Ford played a crucial role in the development of the motor company, in the early days of the company, he also relied heavily on the organisation and management of his Canadian partner James Couzens to promote and distribute the cars. Couzens had a great instinct for business. But, Ford and Couzens often fell out, and Ford resented the high salary of Couzens ($150,000 a year in 1914). In 1915, Couzens sold out and left the company. Ford continued to grow and expand, however by the 1920s, rival motor companies started to chip away at Ford’s dominance. In particular, General Motors and Chrysler replicated Ford’s efficiency but they were able to offer better cars, such as cars with an automatic starter. From the mid 1920s, Ford saw its market share slip.

In the 1920s, Ford became interested in other projects outside the motor industry. He was fascinated with the properties of the soybean and its versatility in creating different foodstuffs. In 1927, he launched an ambitious project to develop his own rubber supply in Brazil. Ford didn’t like being at the mercy of imports from the British Empire with a lack of control over costs. He aimed to build a model plantation and town on the edges of the Amazon rainforest. However, the project was an expensive failure, with rubber proving hard to grow in Brazil and the project was beset with high costs and a high death rate of workers.

Battle with the unions

Whilst Henry Ford paid a high wage, he was hostile to the role of trades unions. For a long time, he battled against the trades unions, refusing to have anything to do them. Ford employed the notorious Harry Bennett who was ruthless in attacking those seeking to unionise. In 1932, Bennett’s armed men shot and killed five workers at Ford’s River Rouge Complex.

In 1937, the great union leader Walter Reuther began distributing leaflets at the Ford factory in Michigan, with the simple slogan ‘Unionism not Fordism.’ Again, Ford’s hired thugs viciously beat up Reuther and other trades unionists. However, this time the event was witnessed by journalists – in what became known as the “Battle of the Overpass.” The brutality shifted public opinion away from car owners to workers wishing to unionise. In 1941, with the workers again on strike, his wife encouraged Ford to capitulate to the United Auto Workers (UAW) and Ford finally agreed to the recognition of unions.

Views on Peace and War

Henry Ford had a dislike of war. He helped to fund a peace ship to Europe in 1915 and spoke out against the ‘vague financiers who encourage war’.

“Instead, many of these business men are working hand in glove with the military men who start, drive and end the wars. And they are in it for what they can get out of the murder to fatten their wallets. They work for the very conditions that pre- vent good wages and steady work for willing men. What will they do with their surplus of munition-makers when the war is ended?”

In the lead up to the Second World War, like many Americans, he advocated an isolationist stance. Even after Pearl Harbour, he never got involved in the Second World War effort, though he allowed other officials in the Ford company to transform Ford into one of the biggest military plane builders of the war.

Henry Ford generally did not affiliate to a political party. However, in 1924, Woodrow Wilson persuaded him to run for the Senate as a Democrat. After narrowly losing his bid, he did not get involved in party politics again.

Henry Ford also subscribed to various anti-semitic pamphlets and in the 1920s bought his own newspaper and turned it into his own general magazine. The magazine did not sell well because the articles were often obtuse with little popular appeal. However, Ford continued to put money into magazine and pushed the magazine at Ford motor showrooms across the country. The magazine printed several anti-semitic articles accusing Jews of controlling the media, Hollywood and even fixing baseball’s World Series of 1921. Ford felt it was perfectly rational to have no prejudice to individual Jews (he employed a good Jewish friend Albert Kahn to design his factories) whilst at the same time holding political views which were prejudicial.

However, in 1927, his magazine was sued by a Jewish lawyer named Aaron Shapiro who had been defamed in Ford’s independent with typical anti-semitic smears. The case went to trial and Ford was called to testify. One day before he was due to testify, he had a serious road accident and the trial had to be rescheduled. Before the trial came to cour, Ford decided to send a letter of apology, pay costs and promise not to repeat the smears. The Independent was closed with a loss of $5 million and Ford retreated from making anti-semitic public statements, but his apology may have been written by others in the company, and in private he continued to share his anti-semitic views.

Adolf Hitler openly admired Henry Ford (he had a picture of Ford in his room). Ford is the only foreigner mentioned in Mein Kampf. Hitler wanted Volkswagen to mirror the production techniques and philosophy of Ford Motor company. In 1938, Ford accepted the Grand Cross of the German Eagle – the highest civilian honour from Nazi Germany. However, he was sceptical of German militarism saying to the New York Times.

“My acceptance of a medal from the German people does not, as some people seem to think, involve any sympathy on my part with Nazism. Those who have known me for many years realize that anything that breeds hate is repulsive to me”. (1)

“You will find men who want to be carried on the shoulders of others, who think that the world owes them a living. They don’t seem to see that we must all lift together and pull together.” – Henry Ford. As quoted in Wisdom & Inspiration for the Spirit and Soul (2004)

Towards the end of his life, he spent considerable time with his friend Thomas Edison, who moved into West Orange, New Jersey. He said that money never particularly appealed to him and throughout his life, he retained his thrifty nature and unwillingness to spend money on himself.

“I never have known what to do with money after my expenses were paid—can’t squander it on myself without hurting myself, and nobody wants to do that. Money is the most useless thing in the world, anyhow.” – Henry Ford’s Own Story, ch.4

Ford was brought up in the Episcopalian church, but he was not a committed follower. He adopted a belief of reincarnation into his world view, saying that he believed it took many lives to develop certain skills and abilities.

“Genius is experience. Some seem to think that it is a gift or talent, but it is the fruit of long experience in many lives.”

Talking of religion, he advocated the importance of living rather than studying religion.

“Religion, like everything else, is a thing that should be kept working. I see no use in spending a great deal of time learning about heaven and hell. In my opinion, a man makes his own heaven and hell and carries it around with him. Both of them are states of mind.” (Henry Ford’s own story) 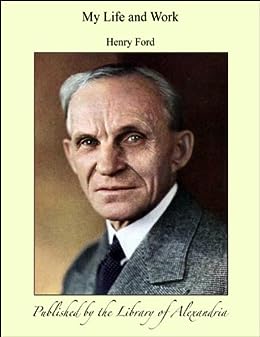