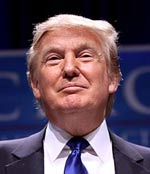 Donald Trump (1946 – ) is the 45th President of the US. For many years he was chairman and president of the Trump Organisation, which has a diverse range of business and real estate businesses. Trump also rose to prominence through his appearance in The Apprentice (U.S.) a reality tv show where contestants bid for the opportunity to head one of Trump’s companies.

Donald Trump was born 14 June 1946, in Queens, New York to German immigrant parents. His father Fred Trump was a successful real estate developer. It is estimated Donald inherited at least $413 million from his father between the age of 3 and 58. A NYTimes investigation suggested this involve tax avoidance schemes.

Donald attended the private Kew-Forest School, Fordham University and then the Wharton School of Business at the University of Pennsylvania, graduating in 1968 with a degree in economics. He was eligible for the Vietnam draft but received deferments for being a student, and later a medical deferment, attributed to heel spurs in both feet.

After leaving university, he worked with his father in real estate development in Brooklyn, Queens and Staten Island. In the 1970s, with help from his father, he then moved to Manhattan, where Trump created the Trump Organisation.

“It was good for me,” Donald later commented. “You know, being the son of somebody, it could have been competition to me. This way, I got Manhattan all to myself.”

His business interests expanded, taking in hotels, casinos, Trump Shuttle airline and a mega-yacht. For Trump, the key attraction of his work was often in negotiating a deal.

“I don’t do it for the money. I’ve got enough, much more than I’ll ever need. I do it to do it. Deals are my art form. Other people paint beautifully on canvas or write wonderful poetry. I like making deals, preferably big deals. That’s how I get my kicks.”

In 1991, losses from the Taj Mahal Casino forced Trump into bankruptcy, but he sold off parts of his business and was able to continue in business.

A distinctive feature of Trump’s business and real estate ventures has been the prominent use of his own name. For example, Trump World Tower, Trump Place and Trump clothing ranges. Trump is also a keen golfer and has brought many golf courses across the world, including Ireland and Scotland.

Many real estate property dealers and businesses have paid to license the Trump brand name. However, since his presidential election campaign of 2015 and 2016, many have sought to distance themselves from Trump’s controversial political views on Mexicans, women and Muslims. Retailers, such as Macy’s have dropped Trump-branded products.

Net Worth of Donald Trump

In 2012, Trump declared his own net worth at around $7 billion. In 2015, Forbes estimated his net worth at $4 billion. When running for Presidential candidate in 2015, Trump claimed a net worth in excess of ten billion dollars, though he said it can fluctuate with markets.

Before the 2016 Presidential election, he refused to release his income tax returns – breaking with tradition. The New York Times released a tax return from 1995 which showed that Trump lost $916m in a single year and as a result could use tax laws to avoid paying federal taxes for 18 years, a charge he did not deny.

From 1996 to 2015, Trump owned part of Miss Universe beauty pageants. Though Trump sold his interests in 2015, after a dispute over his presidential address on Mexican immigrants.

In 2003, Trump became the executive producer of the NBC programme – The Apprentice. It was one of the most popular tv programmes, with Trump selecting a candidate to gain a job in his business. During the series, Trump would fire the unsuccessful candidates with the catchphrase “You’re fired”

Trump has had mixed political affiliations. He has been both a registered Democrat and Republican. He has given money to both Republican and Democratic presidential candidates. He was critical of both George Bush presidencies and said Bill Clinton was one of the best modern presidents. Since 2012, he has been in the Republican party and in 2015 announced his intention to seek the Republican candidacy.

During the 2016 primaries, his outsider persona made him an unexpected front-runner – dismaying the Republican establishment. Through the campaign, Trump projected a populist appeal. He has focused on dealing with the electorate’s fears over immigrants and terrorism. His campaign slogan is “We are going to make our country great again.”

Trump’s controversial policies include the suggested deportation of illegal immigrants in the US and the building of a wall between Mexico and the US. He has called for a ban on Muslims entering the US, and greater surveillance of mosques.

His pledge to ban Muslims coming into the US has been criticised by many world figures and the US Pentagon. It would include banning many Muslims who are allies in the fight against terrorism. However, this has been controversial both home and abroad. The Pentagon issued a statement that “anything that bolsters ISIL’s narrative and pits the United States against the Muslim faith is certainly not only contrary to our values but contrary to our national security.”

On social issues he is conservative, declaring himself pro-life. He also is opposed to gun control and favours replacing the Affordable Care Act with a free market plan.

He has called global warming a “total hoax created by the Chinese to make US manufacturing non-competitive.” He supports increased fracking and is opposed to wind power.

Throughout his campaign, Trump’s controversial statements seemed to attract more popular support. As Trump himself stated on 23 January 2016

“They say I have the most loyal people — did you ever see that? Where I could stand in the middle of 5th Avenue and shoot somebody, and I wouldn’t lose any voters. It’s like incredible.”

Trump has been married three times. He has five children. Three with Zelnickova, and one with Maples and Knauss.

Trump is a Presbyterian Protestant, though his church says he is not an active member. Trump has received the backing of many religious leaders in his presidential campaign.

He has a high sense of self-esteem, which some have called ego-mania.

“My IQ is one of the highest — and you all know it! Please don’t feel so stupid or insecure; it’s not your fault.”

“I think the only difference between me and the other candidates is that I’m more honest and my women are more beautiful.”

Despite losing the popular vote by nearly 3 million, Trump won the electoral college 306 – 232, after securing the swing states, such as Florida, Michigan, Ohio and Pennsylvania.

Trump took office on January 20, 2017. Among his first executive orders were an order to ban immigrants from Muslim countries, such as Syria and Iraq. He also sought to, unsuccessfully, repeal Obama Health Care and build a wall between US and Mexico.

Trump has courted controversy for supporting far-right organisations and appearing to be sympathetic to white supremacist groups. He has also frequently been accused of lying or giving misleading statements. (Politico fact)

On foreign policy, he withdrew the US from the Paris Accord on global warming.

In 2019, the House of Representatives began an impeachment process against Donald Trump following a government whistleblower accusing Trump of holding back aid on the condition Ukraine would launch an investigation into the son of Joe Biden (a Democratic contender for the 2020 Presidential campaign.) The impeachment process was passed by the House of Representatives. In early 2020, with low polling ratings, Trump approved a missile attack to kill a popular Iranian General General Qassem Suleimani.

Trump has authored many best-selling books including

Donald Trump – the art of the Deal

Donald Trump – The Art of the Deal at Amazon

Crippled America: How to Make America Great Again at Amazon