Salvador Dali (11 May 1904 – 23 January 1989) –  Avant-garde Spanish surrealist painter, film-maker, sculptor, and photographer. Famous works include “The Persistence of Memory” which hints at the illusion of time. Dali sought to challenge convention through his surrealist art.

Salvador Dali was one of the most iconic painters of the Twentieth Century, with a range of imaginative, striking and surrealist work. His repertoire was influenced by classical Renaissance masters, but he also enjoyed painting with a new avant-garde approach, which investigated the role of the sub-conscious and dream world. As well as painting, he became involved in film, sculpture and photography.

Dali was born in Catalonia (a region of Spain in 1904) on 11 May in Figueras. He placed great emphasis on his Arabic lineage (descendant of the Moors); he stated that this Arabic lineage influenced his approach to life and was a factor behind his love of luxury and oriental clothes.

Dali had a habit of doing eccentric things which polarised opinions. His eccentric manner was a reflection of his art and vice versa. The fact that he was always in the limelight made his paintings more famous. He could also display a supreme confidence.

“Each morning when I awake, I experience again a supreme pleasure: that of being Salvador Dali.”

Dali was brought up by a strict father, close to the French border of Catalonia. However, his artistic side was encouraged by a domestic servant. He later went to drawing school and by the time he was 15, had his first public art exhibition in Figueres.

In 1921, after the death of his mother, he moved to Madrid, where he devoted more time to art. He experimented with Cubism and Dada, two new strands in modern art. He also became well known for his distinctive, eccentric dress sense. His rebellious attitude culminated in 1926 when he was expelled from art school just before his exams. Dali had complained no one in his art school was sufficiently competent to judge him.

After leaving art school, he travelled to Paris, where he became friendly with Pablo Picasso. Picasso was a significant influence on the young Dali, and some of his early works were inspired by Picasso’s style. But, Dali was never an imitator, he was always seeking to incorporate cutting-edge avant-garde styles into his work. His work became increasingly well known, and reviews were mixed with art critics increasingly polarised by the work of Dali.

In 1928, Dali was visited by fellow surrealist artists Andre Breton, Rene Magritte and the poet Paul Eluard. Dali began painting the Gala – wife of Eluard – and Dali and Gala fell in love. By the time the painting session had finished, Gala broke off with her husband Eluard and began a lifelong partnership with Dali.

In 1930, Dali and Gala settled in the port of Lligat on the northeast coast of Spain in Catalonia. They lived in an old fisherman’s hut, which Dali transformed into a surreal labyrinth of stairs and corridors. The two were close until Gala’s death in 1982. In later paintings, Dali often painted Gala as a goddess or saint. 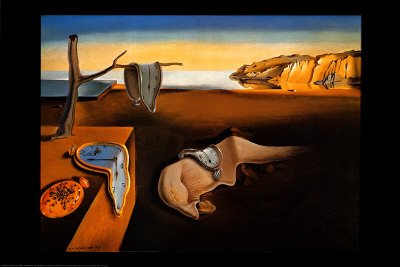 The persistence of memory

In 1931, Dali painted one of his most famous works, ‘The Persistence of Memory’. Sometimes called ‘Soft Watches’ or ‘Melting Clocks,’ the work introduced the surrealistic image of a soft, melting pocket watch. It is has become an iconic artwork of the twentieth century – amongst other things it points to the illusion of time. Dali wanted to bring his dream world into his art. He was fascinated with the riddle, symbolism and the challenging imagery of dreams. There was also an element that Dali liked to shock – and his art tended to create strong opinions of love or dislike.

Salvador Dali wrote on the importance and symbolism of surrealism.

“Surrealism is destructive, but it destroys only what it considers to be shackles limiting our vision.”

When Franco rose to power in 1936, Dali was one of the few Spanish intellectuals to support Franco; this left him a lifelong association with Fascism, which coloured many people’s views of Dali. In 1935, he was excluded from the surrealist group by Breton because of his fascination with Adolf Hitler. Fellow artists, who were often of a different political persuasion, felt betrayed by Dali’s support for Fascism.

As World War II started in Europe, Dalí and Gala moved to the United States in 1940, where they lived for eight years. In 1942, he published his autobiography, The Secret Life of Salvador Dalí. In 1949 he returned to Catalonia living under Franco’s regime.

In the post-war years, Dali continued to be inventive, experimenting with unusual media, such as holography, 4D and bulletist works. Some art contained optical illusions, and his work had an influence on future pop art.

“People love mystery, and that is why they love my paintings.”

In 1971 he opened a Dali Museum in Cleveland, which was later moved to Florida. He also began work on Dali Theater and museum in his hometown of Figueres. This proved to be an important body of his work.

In 1982, he was awarded the title the Marquis of Pubol by King Juan Carlos of Spain.

Dali died in 1989, at the age of 84, from heart failure. He is buried in the crypt of Teatro Museo in Figueres.

The Persistence of Memory