“With malice toward none; with charity for all; with firmness in the right, as God gives us to see the right, let us strive on to finish the work we are in; to bind up the nation’s wounds…. ”

Abraham Lincoln was born Feb 12, 1809, in a single-room log cabin, Hardin County, Kentucky. His family upbringing was modest; his parents from Virginia were neither wealthy or well known. At an early age, the young 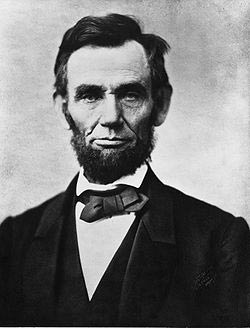 Abraham lost his mother, and his father moved away to Indiana. Abraham had to work hard splitting logs and other manual labour. But, he also had a thirst for knowledge and worked very hard to excel in his studies. This led him to become self-trained as a lawyer. He spent eight years working on the Illinois court circuit; his ambition, drive, and capacity for hard work were evident to all around him. Lincoln became respected on the legal circuit and he gained the nickname ‘Honest Abe.’ He often encouraged neighbours to mediate their own conflicts rather than pursue full legal litigation. Lincoln also had a good sense of humour and was deprecating about his looks.

“If I were two-faced, would I be wearing this one?”

Lincoln was shy around women but after a difficult courtship, he married Mary Todd in 1842. Mary Todd shared many of her husband’s political thinking but they also had different temperaments – with Mary more prone to swings in her emotions. They had four children, who Lincoln was devoted to. Although three died before reaching maturity – which caused much grief to both parents.

As a lawyer, Abraham developed a capacity for quick thinking and oratory. His interest in public issues encouraged him to stand for public office. In 1847, he was elected to the House of Representatives for Illinois and served from 1847-49. During his period in Congress, Lincoln criticised President Folk’s handling of the American-Mexican War, arguing Polk used patriotism and military glory to defend the unjust action of taking Mexican territory. However, Lincoln’s stance was politically unpopular and he was not re-elected.

After his political career appeared to be over, he returned to working as a lawyer in Illinois. However, the 1850s saw the slavery question re-emerge as a prominent divisive national issue. Lincoln abhorred slavery and from a political perspective wished to prevent slavery being extended and ultimately be phased out.

“We hold these truths to be self-evident: That all men are created equal”

Lincoln had a strong capacity for empathy. He would try to see problems from everyone’s point of view – including southern slaveholders. He used this concept of empathy to speak against slavery.

Lincoln’s speeches were notable because they drew on both legal precedents but also easy to understand parables, which struck a chord with the public.

In 1858, Lincoln was nominated as Republican candidate for the Senate. He undertook a series of high-profile debates with the Democratic incumbent Stephen Douglass. Douglass was in favour of allowing the extension of slavery – if citizens voted for it. Lincoln opposed the extension of slavery. During this campaign, he gave one of his best-remembered speeches, which reflected on the divisive nature of America.

“A house divided against itself cannot stand. I believe this government cannot endure, permanently, half slave and half free. I do not expect the Union to be dissolved — I do not expect the house to fall — but I do expect it will cease to be divided. It will become all one thing or all the other. ” (House Divided)

In this House Divided speech, Lincoln gave a prophetic utterance to the potential for slavery to divide the nation.

Although he lost this 1858 Senate election, his debating skills and oratory caused him to become well known within the Republican party.

On February 27, 1860. Lincoln was also invited to give a notable address at Cooper Union in New York. The East Coast was relatively new territory for Lincoln; many in the audience thought his appearance awkward and even ugly, but his calls for moral clarity over the wrongness of slavery struck a chord with his East coast audience.

“Let us have faith that right makes might, and in that faith, let us, to the end, dare to do our duty as we understand it.” (Cooper Union address)

The reputation he gained on the campaign trail and speeches on the East coast caused him to be put forward as a candidate for the Republican nominee for President in 1860. Lincoln was an outsider because he had much less experience than other leading candidates such as Steward, Bates and Chase, but after finishing second on the first ballot he went on to become unexpectedly nominated.

After a hard-fought, divisive campaign of 1860, Lincoln was elected the first Republican President of the United States. Lincoln’s support came entirely from the North and West of the country. The south strongly disagreed with Lincoln’s position on slavery

The election of Lincoln as President in 1861, sparked the South to secede from the North. Southern independence sentiment had been growing for many years, and the election of a president opposed to slavery was the final straw. However, Lincoln resolutely opposed the breakaway of the South, and this led to the American civil war with Lincoln committed to preserving the Union.

Lincoln surprised many by including in his cabinet the main rivals from the 1860 Republican campaign. It demonstrated Lincoln’s willingness and ability to work with people of different political and personal approaches. This helped to keep the Republican party together.

The Civil War was much more costly than many people anticipated and at times Lincoln appeared to be losing the support of the general population. But, Lincoln’s patient leadership, and willingness to work with unionist Democrats held the country together. Lincoln oversaw many of the military aspects of the war and promoted the general Ulysses S Grant to command the northern forces.

Initially, the war was primarily about the secession of southern states and the survival of the Union, but as the war progressed, Lincoln increasingly made the issue of ending slavery paramount.

On September 22, 1862, Lincoln issued the Emancipation Proclamation that declared the freedom of slaves within the Confederacy.

“… all persons held as slaves within any State or designated part of a State, the people whereof shall then be in rebellion against the United States, shall be then, thenceforward, and forever free” (Emancipation Proclamation)

The Proclamation came into force on January 1, 1863. Towards the end of the year, many black regiments were raised to help the Union army.

After a difficult opening two years, by 1863, the tide of war started to swing towards the Union forces – helped by the victory at the Battle of Gettysburg in July 1863. Lincoln felt able to redefine the goals of the civil war to include the ending of slavery.

Dedicating the ceremony at Gettysburg on November 19, 1863, Lincoln declared:

“Four score and seven years ago our fathers brought forth on this continent, a new nation, conceived in Liberty, and dedicated to the proposition that all men are created equal.

that we here highly resolve that these dead shall not have died in vain — that this nation, under God, shall have a new birth of freedom — and that government of the people, by the people, for the people, shall not perish from the earth.”

Eventually, after four years of attrition, the Federal forces secured the surrender of the defeated south. The union had been saved and the issue of slavery had been brought to a head.

After the Civil War

In the aftermath of the civil war, Lincoln sought to reunite the country – offering a generous settlement to the south. When asked how to deal with the southern states, Lincoln replied. “Let ’em up easy.” Lincoln was opposed by more radical factions who wanted greater activism in the south to ensure civil rights for freed slaves.

On January 31, 1865, Lincoln helped pass through Congress a bill to outlaw slavery. The Thirteenth Amendment to the United States Constitution was officially signed into law on December 6, 1865.

Some northern abolitionists and Republicans wanted Lincoln to go further and implement full racial equality on issues of education and voting rights. Lincoln was unwilling to do this (it was a minority political view for the time) Frederick Douglass, a leading black activist (who had escaped from slavery) didn’t always agree with the policies of Lincoln but after meeting Lincoln, he said enthusiastically of the President.

“He treated me as a man; he did not let me feel for a moment that there was any difference in the color of our skins! The President is a most remarkable man. I am satisfied now that he is doing all that circumstances will permit him to do.”

Five days after the surrender of Robert E. Lee and the Confederate Army, Lincoln was assassinated by John Wilkes Booth while visiting Ford’s Theatre. Lincoln’s death was widely mourned across the country.

Lincoln is widely regarded as one of America’s most influential and important presidents. As well as saving the Union and promoting Republican values, Lincoln was viewed as embodying the ideals of honesty and integrity.

“Posterity will call you the great emancipator, a more enviable title than any crown could be, and greater than any merely mundane treasure.”

“Five score years ago, a great American, in whose symbolic shadow we stand today, signed the Emancipation Proclamation. This momentous decree came as a great beacon light of hope to millions of Negro slaves who had been seared in the flames of withering injustice. It came as a joyous daybreak to end the long night of their captivity.”

A. Lincoln – a Biography

I am Abraham Lincoln by Brad Meltzer at Amazon

Abraham Lincoln Facts – Facts about the life of Abraham Lincoln from the humble surroundings of his birth through his career as lawyer, politician, President and orator.


Lincoln Quotes – “Nearly all men can stand adversity, but if you want to test a man’s character, give him power.” – Abraham Lincoln